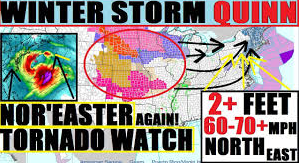 Please note due to inclement weather and dangerous road conditions our warehouse in JFK will be closing for the afternoon. Many ocean terminals have shut their gates for the night as well. They will reopen in the morning once the storm has passed. Winter Storm Quinnbegan pounding the Big Apple and surrounding areas Wednesday afternoon with heavy snowfall, powerful lightning strikes and roaring thunder.

The storm is expected to intensify; with snow falling at a rate of 1 to 2 inches an hour; and may leave up to a foot in the city. Once it picks up, it doesnt matter what time of the year it is, itll stick to the pavement, especially after the sun begins to lower, said Accuweather meteorologist Carl Erickson.

Meteorologists reported flashes of lightning at the World Trade Center, Holland Tunnel and elsewhere as part of thundersnow, where layers of unstable air moving upward increase snowfalls and cause thunderstorms. The Mayor has also asked that New Yorkers go home early if they could to avoid intense afternoon rush-hour snow.
Airports were also hit hard by the storm, with about 2,000 flights canceled in the New York area across JFK, Newark and LaGuardia, according to Flight Aware.

Hudson Valley counties, which were already hit hard in last weeks storm, could see up to 2 feet of snow. More than 25,000 customers in the Lower Hudson Valley were still without power since last weeks noreaster.

We will continue to monitor the situation and update everyone.