A client asked me a question about the use of a carrier and in order to answer properly I did a little research. Enclosed is the information I gathered which I thought was interesting to share with all of our team. We have new staff that is not yet very knowledgeable in our industry.

Notice that few companies were established after the container revolution of the 1960s. Nearly every carrier except the European ones was founded after the advent of containerization. All of these are firms that adapted to the future or outcompeted the legacy businesses Consider that Maersk bought its first container ship only in 1973.

The current top five ocean carriers are all either private- or family-owned. Maersk may be a public company, but the majority of its shares are in family hands. In addition, for roughly 100 years Maersk was run by two men: Møller père and Møller fils.

1st Maersk Line (4.1 million TEU)
The largest container shipping company in the world is the Maersk Line, which is part of the Danish conglomerate A.P. Moller – Maersk Group.
Maersk was founded in 1928 and based in Copenhagen, Denmark. It’s such a large company that its revenues are 14% of Denmark’s GDP.

A.P. Moller-Maersk is the world’s largest integrated shipping company with a total capacity of 4.1m TEU. It operates a fleet of 708 vessels including 307 own container vessels and 401 chartered container vessels as of December 2019.
The Danish company also plans to add 11 401m-long container ships with 19,630 TEU capacity each to its fleet by 2021. The new ships will be the largest container vessels in the Maersk fleet. Two 18,500 TEU Triple-E vessels and seven Baltic feeder vessels will also join the Maersk fleet.
The company operates diverse business segments, including the ocean, logistics, terminals and towage, manufacturing, and others. The company’s digital container logistics platform TradeLens serves 98 directly integrated ports and terminals.

2nd Mediterranean Shipping Company (3.8 million TEU)
The Mediterranean Shipping Company (or MSC) was founded in 1970 by Gianluigi Aponte, an Italian. It’s headquartered in Geneva, Switzerland.
MSC’s most important port at Antwerp, Belgium.
The company operates a fleet of 560 cargo vessels, carrying 21m TEUs annually.
MSC has a network of 493 offices and employs 70,000 people across 155 countries, while its fleet calls at more than 500 ports worldwide.
The company operates a modern fleet comprising Gulsan Class vessels, a new class of sustainable container ship, to minimise the environmental impact. The vessel design offers the lowest carbon footprint at 7.49gm of CO₂ emissions to move 1t of cargo to one nautical mile.

3rd COSCO (3.1 TEU)
The China Ocean Shipping Company is based in Beijing. The previous five carriers are either privately- and/or family-owned. COSCO is owned by the Chinese government.
China Ocean Shipping Company (COSCO) Shipping Lines, a fully owned subsidiary of China’s state-owned shipping giant COSCO SHIPPING Holding, operates 507 container vessels with a combined capacity of approximately 3.1m TEU.
COSCO’s fleet serves 401 international and domestic shipping routes and calls in 356 ports in 105 countries. The company operates a total of 235 corporate offices, including 97 domestic and 138 international offices.
COSCO SHIPPING Holding has a stake in 59 terminals worldwide, including 51 container terminals. The annual throughput of its container terminals is approximately 126.8m TEU, making it the world’s leading ports operator.

5th Hapag-Lloyd (1.7 TEU)
Hapag-Lloyd is a Hamburg-based firm formed from the merger of two 19th century companies: The Hamburg-Amerikanische Paketfahrt AG and the Norddeutscher Lloyd.
German container shipping line Hapag-Lloyd operates a fleet of 248 vessels with a combined capacity of approximately 1.7m TEU. The company has a 7% market share of the total capacity of the global container ship fleet.
Hapag-Lloyd has ordered 77 container ships with a total of approximately 0.8m TEU transport capacity in 2019. The new vessels will be able to transport various types of cargo such as oversized, and dangerous goods.
Headquartered in Hamburg, the shipping line employs more than 13,000 personnel and operates 392 sales offices in 129 countries worldwide. 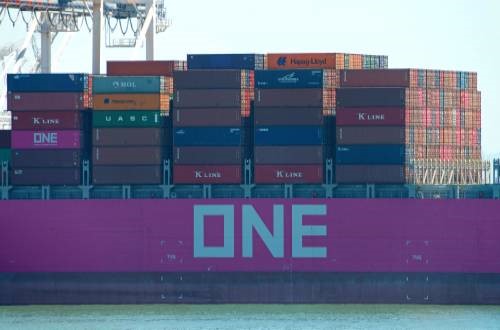 6th Ocean Network Express (ONE) – Hapag-Lloyd (1.7 TEU)
Ocean Network Express (ONE) operates a fleet of 224 vessels with a combined capacity of 1.5m TEU, making it the world’s sixth-largest container carrier.
ONE was established through the liner service integrations of Mitsui O.S.K. Lines (MOL), Kawasaki Kisen Kaisha (K-Line), and Nippon Yusen Kaisha (NYK) in July 2017.
Headquartered in Singapore, the company employs 8,000 people worldwide and offers more than 130 services each week with coverage across 120 countries.

8th Orient Overseas Container Line (700,000 TEU)
OOCL is a Hong Kong-based integrated shipping company, specialized in refrigerated cargo. The OOCL fleet includes 104 vessels with a combined capacity of 733,520 TEU as of December 2019.
The average size of the OOCL fleet was 8,915 TEU, while the average age of its vessels was 9.77 years as of December 2019.
The company had not ordered new ships in 2019. However, it placed an order for five 23,000 TEU container ships in March 2020, which are expected to be delivered by 2023.
OOCL is a fully integrated logistics and containerized transportation services provider with operations across Asia, Europe, the Americas, Africa, and Australasia. 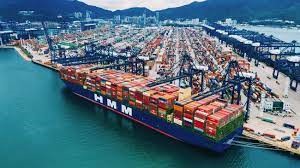 9th HMM (700,000 TEU)
HMM operates a fleet of 110 container vessels with a combined capacity of 728,416 TEU. It is the biggest Korean national container carrier. The company has three container terminals.
The company is inducting a modern fleet of 12 24,000 TEU and eight 16,000 TEU container vessels equipped with the latest smart ship solutions. Delivered between April and September 2020, the 24,000 TEU vessels are the largest container ships in the world. The 16,000 TEU vessels will enter service in 2021.
Headquartered in Seoul, South Korea, HMM is a global shipping and logistics company with more than 60 sea routes and 100 ports. It is one of the top five carriers operational in the trans-Pacific trade route. 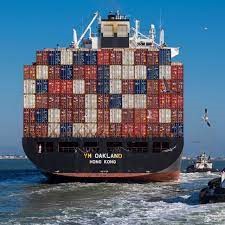